Apple stock is up ahead of the iPhone 13 reveal

Investors are nibbling at Apple (AAPL) ahead of a potentially big September.

Apple shares were among the top trending tickers on the Yahoo Finance platform on Tuesday, notching a gain of about 2% by afternoon trading. It closed Tuesday at $156.69, up 1.55%. The stock has rallied to the tune of 7% in the past month, almost double the Nasdaq Composite. Apple’s stock is the second-best performing member of the FAANG [Facebook (FB), Apple, Amazon (AMZN), Netflix (NFLX), Google (GOOG, GOOGL)] cohort in the last month, only lagging an eye-popping 17% rip higher in Netflix. 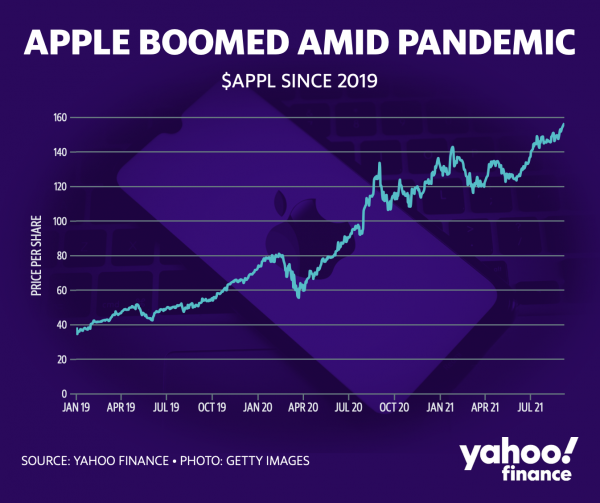 The tech beast is now leading rival Microsoft in the ongoing race of most valuable company — Apple’s market cap is currently $2.6 trillion compared to $2.3 trillion for Microsoft.

First, Apple got the bulls excited on Tuesday by sending out a save-the-date reminder via email for a Sept. 14 event at its Cupertino, Calif., headquarters titled: “California Streaming.” The invite will likely spur speculation on a barrage of new streaming content for Apple that takes direct aim at Amazon and Netflix. But, Apple could also surprise everyone with a new piece of streaming-centric hardware (much lower probability, however).

Meantime, while the invite today suggests a large focus on streaming Apple is widely expected to unveil its latest suite of iPhones. Apple analysts on Wall Street are very bullish on what could be the iPhone 13, but also strong continuing demand for the 5G capable iPhone 12 series.

“We continue to see Apple shares set up for multiple catalysts into the back end of this year, including not only the upcoming iPhone 13 launch, but also low investor expectations for iPhone and total revenue for FY22, led by concerns relative to cycling past the peak upgrade cycle associated with 5G,” pointed out JPMorgan analyst Samik Chatterjee in a recent research note.

Chatterjee raised his 2022 sales volume estimates for Apple, and acknowledged “substantial” upside exists from those raised projections. The analyst sees fair value for Apple at $180 a share, or 15% above current price levels.

“We see upside on several aspects of the business as well as financials that remain under-appreciated by investors, namely the transformation of the company to Services, growth in the installed base, technology leadership, and optionality around capital deployment―all of which together lead us to expect double-digit earnings growth and a modest re-rating for the shares,” Chatterjee added.

Brian Sozzi is an editor-at-large and anchor at Yahoo Finance. Follow Sozzi on Twitter @BrianSozzi and on LinkedIn.